Protect the people you love the most

Due to the Coronavirus concerns, we are lowering the cost of the Air Scrubber so you can protect the people you love – call for special pricing.

How does The Air Scrubber work?

The Air Scrubber by Aerus was developed with Space-Age Technology originally developed by NASA, the Air Scrubber uses germicidal UV light waves in combination with a catalytic process that creates a cleansing process made up of oxygen and hydrogen to clean the air inside your home reducing contaminants, air pollutants, chemical odors, cigarette smoke, pollen, dust, mold, odor-causing bacteria and odors from pets and cooking. 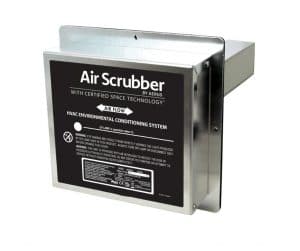 The Air Scrubber has been tested in a variety of settings and has been proven effective in reducing bacteria, viruses and other pathogens on surfaces and in the air in university and laboratory tests. These tests have shown that ActivePure is effective against DNA and other RNA viruses like these, Swine Flu (H1N1), Avian Bird Flu (H5N8), Hepatitis A (HAV), and MS2 bacteriophage.

To watch a video on how the Air Scrubber works, click here or click on the air scrubber to the right.

I have a filter in my HVAC system already, why do I need the Air Scrubber?

The Air Scrubber is 50 times more powerful than the HVAC filter you have in your system. Thirty minutes after installing the Air Scrubber, 90% of the pathogens in the air are eliminated.

How do I know it works?

The Air Scrubber was tested by the most respected labs in the industry. Names like Kansas State University and The University of Cincinnati were involved in the effectiveness research for the ActivePure technology that the Air Scrubber uses to reduce the particulates I the air and contaminants on surfaces.

Where is it installed?

Easily installed into the ventilation system utilizing the key components: the honeycomb surface is coated with titanium oxide and proprietary formula of reactive metals and the UV light. A 4” square cut is made in the ductwork and above the HVAC air handler.

We all have 24 hours in a day and we all need air to breathe. It does not matter who you are. We all have at least these two things in common. How you spend your 24 hours is up to you, and now the quality of the air you breathe at home is up to you as well by installing an air purifier.

The right choice for you. If you:

ActivePure technology can also reduce the toxins that can exasperate:

The best way to control this pollution in your home is to eliminate the pollutants.Protect your family and your home from dangerous contaminants. Eliminate germs and pathogens, including viruses, on every surface of your home, tables, countertops, bathrooms, doorknobs, and furniture. Breathe cleaner air inside your home and eliminate odors from pets and cooking.